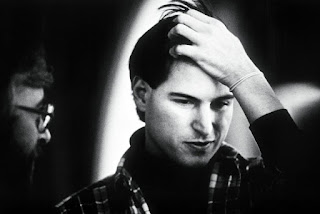 It must have been 1986 when Jobs came to visit Project Athena at MIT. He was known to come to MIT to see what was new and interesting. He made himself at home in the Project Athena demonstration room and asked me if I could find him a MacIntosh to work on. Project Athena was a 100 million dollar campus computing project sponsored by IBM and Digital Equipment Corporation (DEC) and used very high end workstations. Macs were scarce. I went around to the few offices I knew to have some MacIntoshes and asked if I could borrow one.  Nobody wanted to lend me one. So I went back around and said "Did I mention that it's for Steve Jobs? He's in the demo room."  Suddenly there was huge interest in lending him a machine. The news was like wildfire..in 10 minutes there were 20 people trying to casually run into him in the demo room. He was very good natured about it, took the first Mac that was offered him, shot the breeze for a few minutes, and then went to work. I said I was sorry about the crowd. He grinned and kept working.
Posted by ben davis at 2:52 PM