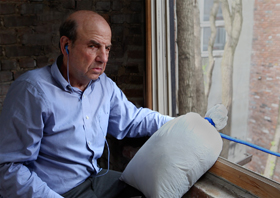 In the past 35 years I've "met" Bud Trillin at least 15 times. For some reason he never seems to remember who I am. In the summer of 1981, I had dinner with he and his wife Alice on Bill Zimmerman and Susan Hauer's island (Great Island) in Medway Harbour in Nova Scotia. I had never heard of him and did not know that he appeared on Johnny Carson occasionally. He just seemed like a funny guy you could joke around with. As it turns out he liked to try out routines on people to see how they might play on the Tonight Show. He was going on about how no self-respecting author would write before noon. I reminded him of Herman Melville which seem to catch him off guard.  That same summer I did a poster for his kid's film festival "Sound of Egg". It was nice oil pastel drawing. I could go on and probably will. Thirty five years is a long time to not remember somebody that you see every summer. It has become something of an annual event.
Posted by ben davis at 1:45 PM