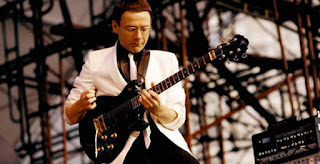 Sometime in the 1980's when I was teaching art in Atlanta I went to see Robert Fripp (King Crimson, League of Gentlemen, Bowie, Eno) performing at Peaches Records. Peaches was a hugh record store. Fripp was by himself with his black Les Paul Custom and a Revox A77 variable speed tape recorder which he called the Frippetronics System.   He took questions at one point and I asked him how he defined being at artist. He said, " You build the tallest building you can build, climb to the top of it and jump off. You can't be pushed", he said. "You have to jump."  His "new standard tuning"  CGD AEG  is quite a tall building.
Posted by ben davis at 1:09 PM