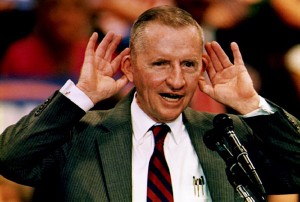 I managed a multimedia group at Project Athena at MIT called the Visual Computing Group. It was an effort to integrate video and photography into the educational computing environment. We prided ourselves on being "application driven", basically making the software conform to the needs of learning environments. In that regard, prototyping different kinds of content was important. One of the connections I made was with the Smithsonian Institution's Department of Natural History. In addition to biology collections they also had a large collection of Native American artifacts. They were very interested in the notion of digitizing things and repatriating  them to the tribes they originated from.  We went down to Washington and took photographs as well as digitizing print images they had and made up a multimedia piece using our technology. We got word that Ross Perot was interested in visiting MIT to see the latest digital technology work. We also knew from the Smithsonian that he was interested in opening a museum in Dallas that would have no permanent collection and would basically borrow exhibition materials and display them. He came to visit us and we sat him down in front of our visual workstation and proceeded to show him  some of the work we had done. We had invited curators from the Smithsonian to attend as well so that when we showed him the Native American work they could pitch him the repatriation idea. They never got to do that. While he was looking at the Native American application he said "This is real interesting. You know when I met with some of the chiefs in Dallas to talk about exhibitions that actually ... can you believe this? ... they wanted their stuff back! Can you believe it? They actually thought maybe we could give them their stuff back! " The group from the Smithsonian got up and quietly walked out.