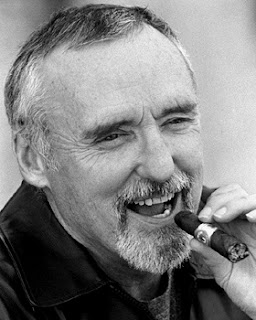 1998?  I think so. I was working at the Getty Center in Los Angeles and Steven Swimmer and I went to an opening. Steven worked at the Getty as well but he was also an independent movie producer and when we saw Dennis Hopper at the opening I started kidding Steven about pitching a movie idea to him. Steven, of course, thought that would be extremely uncool. But I kept after him. Nothing came of it and we wandered away. It was always fun to run into movie stars at the Getty. So on our way out we decided to hit the bathroom. As we stroll in who should be at the urinals taking a leak? Yep, Dennis. So I quickly went into a stall but Steven went right up next to him and starting doing his business. Meanwhile from the stall I start talking to Steven. "Hey you know what movie was a lot like what we were talking about earlier? The Last Movie! Do you remember that one?  A great picture."  Steven mumbled something like "yeah I liked that picture a lot".  Hopper washed up and left.  Steven couldn't believe I had done that - mentioned one of Hopper's movies in the bathroom!  I thought it was hilarious. We went on down to the garage to get our cars and who should be right in front of us getting into his car? Hopper looked up at us and smiled and shook his head.  So cool.
Posted by ben davis at 3:34 PM