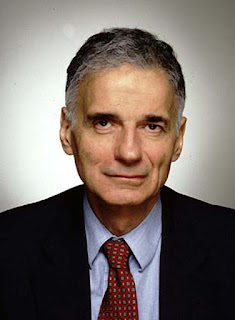 Sometime in the 1990's I was having dinner with some friends in Washington, DC.  Sitting at the next table was Ralph Nader. My first reaction was that he was an old friend and I should get up and say hello. Having never met the man that really wasn't an option. I tried to not look over at him too much as you always wonder if someone looks the same in person as they do on television. My friends suggested if I was so interested maybe I should go over and tell him I was a big fan. But of course you never do such things. So I just got through dinner and thought how nice it was to have a friend like Ralph Nader. Whenever he ran I voted for him. Citizen Nader still going strong at 82. I recently heard him tell an interviewer that when he was in his 40's he was told by someone in their 90's that you never really age until your ideals begin to erode. He said he carried that thought through the rest of his life.  Much like Ben Franklin, Ralph Nader is the only President who was never President.
Posted by ben davis at 1:01 PM