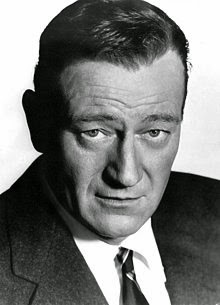 By the time I encountered John Wayne in the summer of 1976 on my fellowship at WSB TV I was not much of a fan. The reporter I was  with that was going to do the interview with him was totally awestruck and had a difficult time doing his job. The interviews were set up with a bunch of desks in a large room and Wayne would go from one network reporter to the other and he wasn't at all happy about it. "Come on will ya ask the questions" he would bellow at the poor guys. Then the WSB handler, which was a woman that Wayne had some earlier relationship with, would take him to someplace picturesque outside the room and make him do a station promo, which he really didn't like doing. He was supposed to be looking at something and then turn around and say "When I'm in Atlanta I always tune in to WSB". He would get about half way through it and then say something like "this is such crap" and the woman would come out and pet him and get him to try it again. They finally got a decent take. His hair piece did not look great from the back either.